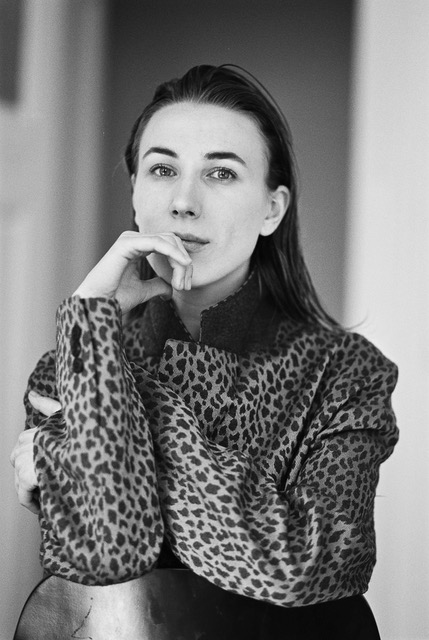 With model and actress Sarah Westendorf, born in 1990. Her latest movie „CPH“ by Israeli director Eitan Sarid, captures the life after the war: an Israeli soldier lost in his own Trauma and the nightlife of Copenhagen — she portrays his danish wife. We talked about ways of facing the own trauma and a possible future. Pictures taken by Lars Gehrlein.

With model and actress Sarah Wessendorf, born in 1990. Her latest movie „CPH“ by Israeli director Eitan Sarid, captures the life after the war: an Israeli soldier lost in his own Trauma and the nightlife of Copenhagen — she portrays his danish wife. We talked about ways of facing the own trauma and a possible future. Pictures taken by Lars Gehrlein.

We’ve met for a coffee at the Blini’s and it was a day, where I felt, I couldn’t deal with more trauma so far. Sarah enters and fills it with her LA-alike attitude. She wears white jeans, a blue denim blouse and her sun bleached hair falls over her shoulder like a wave, just as germans might imagine the valley girls. Of course Sarah speaks more than one language fluent and so we switched between German and English a little more often than usual.

„CPH is about the Trauma in life, you can’t avoid facing someday,“ she told me, when I asked what’s the essence of the movie, which was nominated for the Best Picture at the Jerusalem film festival. „He moved to Copenhagen and got lost there—which happens all the time here—but than his best friend is tearing down his walls and breaks into his apartment. My (movie) husband had to face his trauma all of the sudden.“ I asked her, if she’s familiar with this part and she goes on: „I loved this time of my life, just living the moment in Berlin. I was partying and experimenting with my sexual preferences. Mostly at the Berghain, where I also met Chris. I guess I needed that, to overcome my trauma. But than winter came.“

To quote this myself: winter is the part of the year, when someones life in Berlin, reflects even more intensely, since it is six months long or at least it feels like. We both agreed: „You have to be self aware in this city, Berlin basically is the center of distraction“, she elaborates. I asked  her about Israel and how she’d met Sarid: „I lived in Paris, Tel Aviv, Milan, Los Angeles and other places, but I couldn’t run away anymore. It simply needs time to heal. But I got inspired in Tel-Aviv to start my acting career, we’ve met at a party and had this connection. He wanted to work with me.“

You have to be self aware in this city, Berlin basically is the center of distraction

You can see the curtain is lifting and she’s switching between online and offline, becomes relatable to me. We talk about sexuality and both see souls „as what we aspire to see” in one another. She had tried polyamorous relationships—and as I can confirm as well: „it is time consuming and only helpful to figure out, what you really want.“ Slut shaming pops into my mind, as sort of contradictory thought from the past and dig a bit deeper: „Sure, but I overcame that and found my balance of self-love, career and private maters, which are nobody’s business.“ Agreed.

„Breaking in someones space? I see it as metaphor or opportunity to grow and heal. It might hurt in the beginning, but healing always takes time. People look for a wider spectrum of emotions and I would say fear is, what we all know best“ she continues. It’s this spiritual connection during a conversation, where you don’t know anything about the person in front of you, but feel the emotional depth of your encounter. „It took me the first three years here to simply feel and find peace, working, challenging myself and to face all this unspoken subjects.“

A challenging role, something about what it means to be a woman in all her facets, would be what I aspire.

Since there’s this manifested and inevitably harsh image of Los Angeles, I want to know more about her time there and if she could imagine working there. She smiles: „A challenging role, something about what it means to be a woman in all her facets, would be what I aspire.“ She mentioned that she would love to live in LA after Berlin, but somehow I see her in Germany’s cinema sooner or later, as she confirms the struggle of fitting in. The way she brings together difficult aspects of her private life, her education and the inspiration she got from her travels, leads her into a more authentic way, than Hollywood could produce at the moment. Sarah is incredibly smart and prefers emotional roles, which doesn’t corresponds to the stereotype of the current mainstream. But who want’s to be mainstream?

„It’s exciting, being crazy in a safe environment such as Berlin. Israelis have to be in constant fear about the war, the danger and the fanaticism around them. But finding yourself is often used as an excuse, to not work on the trauma.“ We came back to the movie, she seemed excited about this role in particular. Sarah impresses me as a growing artist, following her vision and her passion. „Fear is the root of any cause of suffering. Not just in this movie…“ and with that, we end our conversation and I thank her for an hour of her time, after I had postponed three times in a row. △